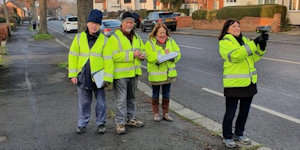 An appeal’s been made for more volunteers to help run Community Speedwatch in Wincanton.

Community Speedwatch is to recruit enough new volunteers to set up at least one Speedwatch at Bayford Hill and West Hill in Wincanton each week.

The appeal follows concerns that roads in and around Wincanton have got a lot busier, and that motorists are driving faster than ever before.

Speedwatch acts as a visible deterrent for motorists who break the speed limit and assists with making local communities safer. The safety of people on the roads and pavements around Wincanton is paramount.

The purpose of Speedwatch is to make motorists, who speed through residential neighbourhoods, aware of the impact their actions have on local residents and the danger they pose to other road users and pedestrians.

If you’re able to volunteer, your help would be greatly appreciated. Training involves an online course that lasts about thirty minutes, together with roadside training lasting about one hour, also completing an application form and sending to Avon and Somerset Police.

Once trained, you can volunteer as much or, as little time, as you can spare.