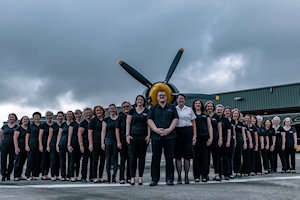 Face to face with computer screens for the past 18 months – the determined Yeovilton Military Wives Choir has seized a scheduling opportunity to deliver the concert they had planned for April 2020 – and they would love to receive your support!

More Information (Radio Ninesprings is not responsible for external websites)

It seems a long time since their incredibly well-received 2019 Concert. Nevertheless, the popularity of the Choir goes before them as they continue to grow in numbers and popularity since their formation which was made famous through the widely televised work of Gareth Malone.

They have cultivated a large audience following as they continue to appeal to both the musical ear and the hearts of their audiences through their immensely valuable work.

With their continued reputation for sell out concerts and high-profile appearances, the choir will once again take their audience on an inspirational musical journey.

The concert will feature songs from patriotic World War favourites, favourite West End musicals right up to modern-day classics, as well as a special selection of their own songs, including much of the new repertoire that has formed part of the choir’s learning over the past twelve months. This stirring concert also promises a few surprises along the way, making it a most wonderful evening of entertainment, but book your seat right now!

A £1 ticket levy is included in all stated ticket prices.

More details for this venue

The event runs from 7:30pm to 10:00pm on the following dates.
Select a date to add this event to your calendar app.