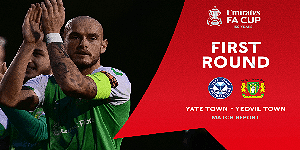 Yeovil Town produced a five star display against Yate Town to secure passage to the second round of the Emirates FA Cup.

First-half goals from Jack Robinson, Charlie Wakefield and Dale Gorman built a comfortable advantage as the Glovers shot out the traps in the first half.

Not resting on their laurels, Adi Yussuf and Sonny Blu Lo-Everton got in on the act in the second half to complete a stunning performance in the cup.

Darren Sarll made one change from the side that drew with Solihull Moors, and that was enforced onto him. With Max Hunt suspended, Morgan Williams returned from injury to take his place.

On the bench, there was a welcome return for skipper Luke Wilkinson who has sat out since the Glovers’ defeat to Chesterfield in September.

Starting on the front foot, it did not take long for Yeovil to find a way in front. Jordan Barnett’s drilled delivery from a corner on seven minutes found Worthington at the edge of the box, and with the help of a number of deflections saw his shot find Robinson to poke the ball into the back of the net.

With less than 15 minutes played, the Glovers added to their advantage with a piece of individual brilliance from Wakefield. After shimmying one way, and then the over, the former Chelsea man found a pinpoint finish to double the lead.

The ball spent the majority of its time in the Yate half, with wave after wave of Yeovil attack bombarding the semi-professional outfit’s backline.

At the half an hour mark, Yeovil added a third from the penalty spot after Worthington was fouled in the area. Gorman stepped up and sent the goalkeeper the wrong way for his second Yeovil Town goal.

In the dying stages of the half, the hosts thought they had found a way back into the game however, a rather blatant handball to push the ball into the net left the referee with no choice but to rule the goal out.

Going into the break as comfortable leaders was the least that the Glovers deserved, and this advantage was only added to in the second half.

Adi Yussuf will be sleeping soundly tonight after his flicked finish caught out Yate goalkeeper Andy Hannah to add Town’s fourth of the afternoon a matter of minutes after the break.

Using his squad to his advantage Sarll rang the changes in the second half, with a return for Wilkinson who replaced Williams with 50 minutes on the clock.

However, this was not his most effective change, that was Sonny Blu Lo-Everton who notched Town’s fifth and final goal of the cup tie with an hour gone. The Watford loanee made room for himself, dropped his shoulder and bent the ball into the bottom corner.

In the closing stages, Yate became a bit more adventurous, looking to strike a consolation goal, but in truth, they did little to test a Yeovil Town side who can look forward to Monday night’s FA Cup draw.

Report courtesy of YTFC. See more details and all the latest news at YTFC.net