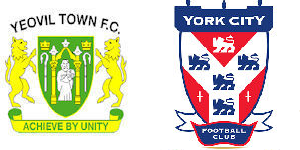 After a quiet first half, the game burst into life in the second, with York creating the better chances.

With ten minutes to go, Lennell John-Lewis struck to secure three points for the newly promoted side.

After Monday’s 0-0 draw away to Wealdstone, Chris Hargreaves made a number of enforced changes. In came Charlie Wakefield, Lawson D’ath and Max Hunt for Gime Touré, Matthew Worthington and Alfie Pond; who recently left the club following his transfer from Exeter City to Wolverhampton Wanderers.

On the bench we saw the return of Sam Pearson from injury and new loan signing from Bournemouth; Owen Bevan.

Yeovil started the game on the front foot and showed an early sign of their intent with a beautifully whipped cross from Morgan Williams.

However, York began to apply themselves and John-Lewis had his header brilliantly saved by Grant Smith, only for the offside flag go up.

The Glovers first real sight of goal came halfway through the first half, when D’Ath’s free-kick was met by Josh Staunton whose header sailed wide of the target.

Wakefield tried to create throughout the first half and won his side a free kick on the edge of the box after bursting through the York midfield. The resulting shot from Alex Fisher went straight into the wall.

John-Lewis continued to be a threat to the Yeovil defence, and after being fed the ball from a throw-in he dinked it over the onrushing Staunton before his volley was tipped over superbly by Smith.

The first half would be perfectly encapsulated by Fisher, who after picking up the ball on the halfway line would turn and fail to make a simple five-yard pass.

Wakefield continued to drive through that midfield and this time found himself through on goal, but the York defender was able to get back and make a last-ditch challenge.

Pearson and Touré were both Introduced on the hour mark as Yeovil looked to win this tight contest.

Fisher then came close as his cross-turned shot was tipped just over the bar by Ross. His first real save of the day.

The Minstermen then should have taken the lead, after a corner from the right found Mitch Hancox, whose free header went over the bar.

City began to threaten the Yeovil goal more, and won a penalty when a cross into the box was handled by Staunton after he misjudged his header.

John-Lewis would step up to take the penalty and would see his effort saved by the feet of Grant Smith. A let-off for Yeovil.

The away side continued to apply the pressure after the disappointment of the penalty and would come close once again with John-Lewis’ header going marginally wide of the target.

Yeovil’s ability to keep the ball was dire at times with York winning the ball back seemingly at will.

The pressure would eventually pay off though. Following a nice move on the edge of the box, the ball would find itself at the feet of that man John-Lewis, who spun and fired a shot that deflected off a defender and into the back of the net.

The home side would finally sustain some pressure towards the end as they looked to find that equaliser. Substitute, Chiori Johnson was inches from it as his header hit the bar following D’Ath’s corner.

But it was York City who would pick up a deserved three points, on a day to forget for Yeovil Town.

Next up is an away trip to Woking next Saturday for a 3 pm kick-off.