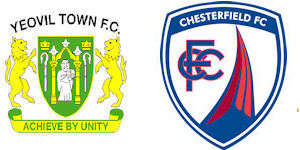 Yeovil Town were held by league leaders Chesterfield in a thrilling 2-2 draw at Huish Park.

Gime Touré got the Glovers up and running with four minutes played, but were quickly pegged back by the visitors.

Town continued to stay on top, and deserved their goal through Josh Staunton, but were once again left to rue missed chances as Jez Uchegbulam stepped up late on to level the affair.

Chris Hargreaves opted for a change of system from Tuesday’s draw with Eastleigh, changing to a 5-3-2.

Grant Smith began in goal once again, with Ben Richards-Everton, Josh Staunton & Owen Bevan in front of him, whilst Chiori Johnson & Jamie Reckord started at wing-back.

It was a frantic start to proceedings, with the Glovers striking ahead with just four minutes played. Reckord dinked the ball into the channel and found Toure battling through, he beat two players, sat down the goalkeeper and placed the ball into an empty net.

However, it took just three minutes for Chesterfield to strike back. After the ball was dragged across the box, it sat up kindly to Jamie Grimes to slam home the leveller.

The Chesterfield goal did little to dishearten Town, who dominated the first half. Bevan went extremely close following a corner, watching his header graze the crossbar in the 10th minute.

Johnson was a useful outlet for Yeovil, he did brilliantly to beat his man and send a low cross into the box on a number of occasions but in fairness Chesterfield defended well.

The best chance to retake the lead in the first half fell in the 25th minute. A deep cross from D’Ath was met by Bevan who dropped the ball into Staunton’s path but he fired over.

Looking to catch the Chesterfield defence lacking, a switch of play was poorly judged by Jeff King, this let Reckord snuck in behind and looked for Linton but his cross was blocked.

For the visitors, they fashioned very little until late on in the half. Neat football around the box found Calvin Miller who had the best effort but he dragged his shot wide.

The second half saw Chesterfield grow into the game a little more, enjoying long spells of possession, but it was the Glovers who looked the more threatening.

Finding success on the break, Yeovil hit Chesterfield on the counter just before the hour mark, with Toure cutting inside and forcing a save from Covolan.

Moments later, Pearson found himself isolated by a defender, he cut onto his right foot and fired a tame effort on goal.

With ten to play, the game almost mirrored the opening stages, with goals for both sides in quick succession.

Yeovil celebrations were short-lived, being pegged back just six minutes later through Uchegbulam who converted following a corner.

Late on, it was Yeovil who went closest to a winner, as the always dangerous Toure fired narrowly over after working room for himself.

Ultimately, it was a point that felt like two dropped for Town, who had produced a performance worthy of three points against the league leaders.